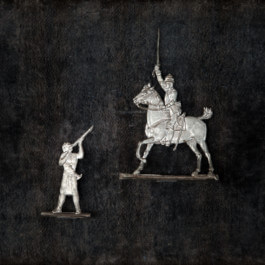 In Namibia there are places where one can buy colonial memorabilia, alongside generic African ornamentation. In an antique shop, the artist chanced upon a collection of tin soldiers. The figurines consist of replicas of British and German colonial troops alongside stereotyped representations of Africans. The German military figures depict ‘Schutztruppe’ who were sent from Germany to German South-West Africa during the Herero and Nama wars of 1904–1908, which culminated in the Namibian Genocide.

Brandt questions what role such games had in the deliberate socialisation and ideological indoctrination of those who played with them. The images depicted by these tin soldiers illustrate to what extent colonialism, and specifically the ideas of conquest which played out in the Namibian-German colonial war, had entered into the collective psyche of Germans and German-Namibians.

The first mass-produced ‘zinnsoldaten’ were made in Germany as a tribute to Frederick the Great during the 18th century. The representation of 'tin soldiers' in Germany range from the Battle of Kunersdorf in 1759 to those of Nazi military troops from the 1940s. The figures are a direct visual representation of the military culture of the time and the coloniser’s perception of the people and landscape that they encounter and invade. The tin soldiers embody a dominating militaristic tradition that is imprinted not only on the minds of adults who venerate the military and what it represents, but also on the minds of children, who become initiated into this culture through these toys. Games like these trivialised the effects of racist indoctrination and warfare, and represented an insidious form of propaganda geared towards male youths.

This kind of problematic memorabilia that is still available in Namibia, is a reminder that there is still a nostalgic fascination for the former German colony, especially for European tourists visiting the country. (German colonial heritage continues to be promoted through Namibian tourism, which has been one of the country’s primary industries.)

For Herero, Nama, and Bushmen/San, whose histories of genocide, trauma and displacement have not been fully acknowledged, this particular cultural heritage – which is both reductive and commodifies complex and painful histories – only serves to increase tensions and divisions along racial lines.