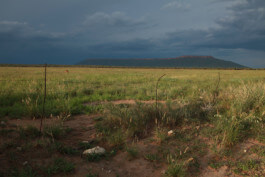 Visual records of place remain to a large degree inadequate when making visible the ephemeral states of consciousness that underlie past histories and conflict, let alone the extraordinary histories and power structures encoded in particular images and views. A country’s identity is a multiplicity of competing and contested memories that are constantly being revised in the present.

In Changing Histories, the artist brings together snapshots of diverse commemorative sites largely related to the Namibian-German War and colonial Genocide, primarily taken in Namibia, but also in Germany. Brandt also documents landscapes of trauma – or historical reckoning – where no physical memorial can be found. As Brandt documents these existing and emerging locations and monuments, different relationships come to the fore. The series oscillates between the past and the contemporary moment, disclosing the power dynamics of knowledge production and memory-making in Namibia and Germany, as well as the contemporary symbolism related to both. Some works provide telling examples of how states often function as arbiters of public memory.

In contrast, Brandt both sources and creates existing and new ‘counter-memorials’ of related histories. Through her documentary and performance strategies, she uncovers and tries to intervene in the perception of these hegemonic systems of memory brokerage. This cross-referencing of memory between conventional and alternative sites exposes multiple versions of history-telling.

En route to Ovitoto, north-east of Windhoek, Namibia, in the Otjozondjupa Region, where an important battle took place between the Ovaherero
and the Germans during the war of 1904 to 1908. The name of the mountain in the image in Otjiherero is Ozongombeotumana.

Images show murals made by North Korean artists, for the Independence Memorial Museum in Windhoek, Namibia. The images memorialize the battle of SWAPO against South African and South West African forces, for the independence of Namibia. Among other historical scenes from the liberation struggle the tragic events at Cassinga are shown.

This controversial Genocide Memorial close to the prisoner-of-war graveyard in Swakopmund has been replaced in 2020 with a new monument. The euphemistic and opaque language has been replaced with a direct and unflinching description of how victims of The Namibian Genocide died: '... in concentration camps of hunger, slave labour, sexual abuse, disease, fatigue and adverse weather conditions at the hands of German soldiers.'

Memorial erected between the German cemetery and the unmarked graves of Herero and Nama prisoners-of-war in Swakopmund.

Images show murals made by North Korean artists, for the Independence Memorial Museum in Windhoek, Namibia. The images memorialize the battle of SWAPO against South African and South West African forces, for the independence of Namibia. Among other historical scenes from the liberation struggle the tragic events at Cassinga, and the war against German colonial forces are shown.

Yakavava Kandiimuine shows the inscription on the gravestone of a German soldier, Oberleutnant Otto von Estorrf who died in 1904 in the region of Ovitoto.

‘Askari’ monuments in the ‘Tansania-Park’, Hamburg-Jenfeld, Germany. The image also shows the suburban residential location of the Deutsch-Ostafrika-Kriegerdenkmal. These monuments have raised a controversial debate in Germany, especially their associations on the one hand with National Socialist art, and on the other hand with the colonial exploits of the colonizer in Africa.