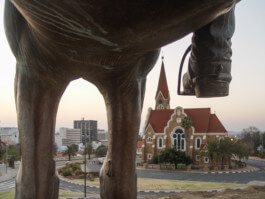 Historical monuments often act as placeholders for memory, allowing what they represent to be forgotten. During August 2009, the Reiterdenkmal, a bronze statue of a horse and rider weighing over two tons and wrapped in plastic, was unbolted, lifted into a crate and moved from its position on a prominent hill in Windhoek. A larger than life size statue of President Sam Nujoma, the first president of independent Namibia, replaced the colonial monument.

Today, close to the former site of the equestrian monument and near the old German fort, the Alte Feste, there is a green field where spectators watch cricket and other sports. Only a century ago this location was a prisoner-of-war camp, where Herero and Nama were kept.

The horse and rider is both a victory monument and a memorial, erected in 1912 by the German colonial government to commemorate the war against the Herero and Nama people who resisted the expansion of German colonial rule between 1904 and 1908. The monument’s prominent position was seen as an ethical and visual assault by many. Its location and symbolism represented this dark chapter of the country’s history, during which a large proportion of the Herero and Nama people lost their lives in what later was considered by many as the first genocide of the 20th century. The Reiterdenkmal now stands abandoned in the courtyard of the nearby fort, where it remains a ghostly testament to the country’s colonial heritage

The removal of the rider monument prompted Brandt to grapple with her role as a descendant of a colonial power. The injustices and brutalities experienced during the colonial and apartheid eras have left an imprint on the collective psyche of Namibians, one which cannot be fixed by simply removing visible references from public spaces. However, such efforts are an important and symbolic step in acknowledging the spectres that haunt contemporary Namibian landscapes.

Katuvangua Maendo contemplates the relocated statue of the Reiter, in its second position
before it was finally moved to the courtyard of the Alte Feste. Windhoek, Namibia, 2012

The Reiterdenkmal’s new location in the courtyard of the Alte Feste, 16 August 2014

Replicating Injury:  A copy of the Reiterdenkmal erected in Swakopmund at a restaurant, April 2019